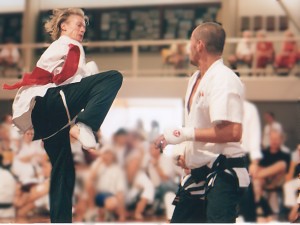 Shaolin “Long Fist” is a style of Northern Kung Fu. Northern China tends to be mountainous with plenty of open land and space. As a result people in the North can run, jump, ride horses etc, more than their cousins in the more confined, densely populated South. Thus Northern Chinese Martial Arts prefer fighting at a long range and emphasise leg movement. In order to punch to a maximum distance, it is necessary to twist your shoulders to extend your arm as far as possible. Thus the Chinese name for this style; Shaolin Quan (Chuan), which means “Long Fist.”

Shaolin isn’t a “strength-on-strength” martial art. In Shaolin the flexibility you develop and reflexes you will learn are far more important than physical strength. An opponent’s strength is used against them. Thus Shaolin allows a smaller, lighter person to defeat a stronger, heavier opponent.

You’ll begin Shaolin by learning the Eight Animal Stances, the Eight Kicks, the Eight Strikes and Eight Basic Self Defence. At the beginning of each class we warm up and do stretching exercises, designed to limber up the body and increase flexibility. The kicks and punches foster your physical strength and coordination. Early on you’ll also learn basic self defence techniques, useful for both men and women. These will help you protect yourself from physical danger while you’re still learning the basics of Shaolin.

The Eight Animal Stances are postures, said to be learnt over a thousand years ago by watching animals. These forms will develop control and physical strength of your body. They also form the foundations of martial art combat. To the right you can see Snake Stance, reminiscent of a snake about to pounce. You’ll also learn Ba Shi Jia, an elegant form which incorporates many of these and other basic forms into a fluid motion. Ba Shi Jia teaches your body how to react to the rapidly changing circumstances of martial arts combat.

As you advance through the syllabus you will develop greater strength and fitness, learn more complicated forms (routines) and gain a greater understanding of the applications. You’ll learn a variety of weapons and your fighting ability will include strategies to handle multiple attackers, armed assailants and more. This is all in addition to increased body awareness, environmental sensitivity, improved health, confidence and self assurance.

Your chief instructor is ShiGong Jason King with over 25 years experience in Shaolin and Chinese Martial Arts, trained by Master Yi-Yen (Ian) Lee .

We hold a variety of classes throughout Brisbane in several locations each week. We cater for all paces and levels, from beginner to advanced. Please click here for our timetable. Your first lesson is free.

The History of Shaolin

There are many stories on the origins of Shaolin Chuan.

Here is one as told by Jwing-Ming and Bolt: Shaolin Kung Fu originated from the Shao Lin Buddist temple, built in the Shao Shih Mountains of China, 377 AD. When Tamo (also known as Da Mo, P’u-t’i-ta-mo or Bodhidharma), a Buddhist Prince, visited in 527 AD he noticed the monks were sick, weak and unable to defend themselves in the lawless lands of the time. He ordered a way be found to strengthen the monks. Nine years later two books were produced; one on strengthening the spirit, and another on strengthening the body. Unfortunately around 569 AD some morally-challenged monks used the contents of the latter book to rob peasants. The temple was ordered shut down, and when reopened the teaching of martial arts and morality fused to prevent a recurrence. Thus the code of martial arts and moral good became one and the same. Over the next thousand years the monks of the Shaolin temple researched and improved the Shaolin system. In 1644 AD the Manchurians invaded China. To eliminate any future uprising, they decided to eliminate the greatest martial arts institution in China at the time; The Shaolin Temple. A century and a half of war ensued. In 1760 AD the monks were forced to flee. They scattered, teaching secretly to fellow Chinese but also fleeing the country to start afresh in places such as Korea, Japan, Taiwan, Okinawa and South East Asia.

Draeger and Smith note there are many different Tamo legends, and it is probably impossible we’ll ever know for sure which are the truest. We do know he was a real person, and that he came to China around 500 AD. The Buddhist Shaolin Temple did exist. In the Shao-shih Mountains it was a beautiful place; “It had twelve upper and lower courts and was ringed almost completely with mountains, festooned with bamboos, cassia and cedar trees, and laced with waterfalls.” It was a very quiet place, and thus attractive for Buddhist scholars meditation, research and translation. There are many different schools of Buddhism. Tamo’s was Zen; a school that teaches enlightenment is achieved through meditation. Boxing did exist at the Shaolin Temple before Tamo’s arrival, but it is not known how formalised it was. Tamo reportedly had difficulty staying awake during meditation, and derived boxing exercises to keep awake. Tamo reportedly left two texts, but only one survived – I-chin Ching; the Muscle Change Classic. But Tamo’s name was not put to this until 1835! Other Tamo legends state he spent nine years facing a wall “listening to the ants scream.” Another is that Tamo, frustrated at his inability to keep awake during Buddhist meditation, cut off his eyelids, and threw them into the soil from which tea trees sprouted (thus allowing other monks to keep awake during their meditation!)

Draeger and Smith conclude it is difficult to be sure just how much Tamo contributed to modern Kung Fu. All we can say with any certainty is that Shaolin Kung Fu probably did originate at the Shaolin Temple!

This history is a summary of that presented in various sources: