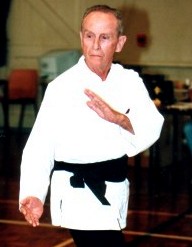 Shifu Ian Taggart (Tag to his friends) sadly passed away on 13th September after a 2 year battle with cancer. As many of you know, Ian was the first student (along with Shifu Richard) to train under Master Lee here in Australia back in 1990. Ever since, Ian was a driving force over the years within the school, giving scores of students the benefits of his passion for Tai Ji and what it can offer. Indeed, Ian was not one to let students miss the nuances and subtleties of the art and was determined that students should gain everything they could from the training.

I can remember visiting his retirement village classes and being shocked at the incredibly low stances he was making his 60 – 80 year old students do. They would put many of my Shaolin students to shame! Hard to believe then, that these were the same retiree students that wouldn’t/couldn’t lift one leg in the air when they first started! The remarkable transformation these students made after only a year or two of training is a testament to Ian’s drive and determination.

Shifu Ian was an instructor with a great eye for detail, the ability to motivate and encourage his students, and perhaps the most reliable and professional member the school has had. In his 10 years of teaching, he would have missed only a handful of classes and then only due to severe circumstances. Ian always arrived well and truly early, prepared the room and did all his own training before class allowing his attentions to be given elsewhere.

Ian’s first knowledge of Tai Ji came from an article in the daily paper that outlined the philosophy and many benefits of the art, both physical and mental. That was in June 1980 and he joined a class. The result was soon apparent as Ian found he had more energy and also moved and felt better and was more relaxed. Tai Ji weapons training started soon after in 1981.

Training became more demanding in 1990 when Master Lee took over after the previous Shifu returned to Hong Kong. Applications (i.e. Self-defence aspects) and Qi Gong were given more emphasis at the time, and the school began an association with the University of National Culture in Taiwan. This relationship continued with regular feedback from some of his senior masters of Tai Ji Quan and Shaolin.

Ian qualified as an instructor of the art on the 30th July, 1999 and continued to learn the way of Tai Ji Quan. The benefits of personal development, self-confidence, physical fitness and mental attitude, leading to a relaxed and stress free feeling, indeed changed his life.

In 2007 Ian opened his own class for Seniors, and continued to be amazed at the health gains and improvements of his students, even starting at an advanced age. It gave him great satisfaction to assist their well-being and he continued to the very last. Tai Ji was such an important part of his life, that even when he wasn’t physically able to lead the class, even while suffering the effects of chemo and radiation, he would turn up to his class to give verbal instruction and notes from the sidelines. His crowning achievement was being able to complete teaching the 24 form to his students who continue to do their own Tai Ji training.

Shifu Ian graciously left his considerable resources to the school, in the hope that it would contribute to the next generation. If anyone is interested in books, videos, magazines or tapes relating to Tai Ji, please see ShiGong Jason who will be happy to offer some suggested material.