Dr. Ian Lee began his martial arts training as a six year old, grappling with other children in the farm fields of Taiwan. His formal training started when he was only 12 years old, completing his first form and demonstrating it to an audience in his hometown. He received highly regarded feedback and thus started his pursuit of the martial arts. Ian has never stopped training and continues teaching and practising today. Ian learned Judo, Karate, Taekwondo, Aikido, Kendo; in fact most martial styles until finally he found his preference in Chinese Martial Arts. 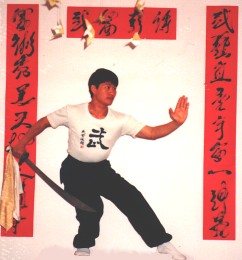 Out of tens of thousands of applicants, Ian was one of twenty selected for enrolment at the Chinese Culture University in the course program of Chinese Martial Arts. He graduated as valedictorian in theory and practical; the first person ever to achieve both. This was followed by a teaching position at the university until he moved to Australia.

From 1986 to 1990, Ian regularly received placings in Taiwan National Competitions. He toured with the National team throughout Asia competing in China, Hong Kong, Korea and also represented Taiwan in the USA. Between 1986 and 2000, Ian participated in six World Cup Competitions collecting 2 Silver medals and 10 Gold medals. In 1996, Ian was awarded his Doctorate Degree of Martial Science from The American Europe Technical Research University.

Ian Lee is a master of Chinese Martial Arts, and in his younger years his fortes included Shaolin, weaponry, Qin Na, and Shuai Jiao (wrestling). These days he focuses more on the internal systems of Tai Ji, Ba Gua, Xing Yi and Qi Gong. He has established full time health clinics in both Taiwan and Australia, where he combines Western Pharmacology, Herbal Medicine, Acupuncture, Chinese Massage and Qi Gong Therapy.

Currently Master Lee resides in Taiwan where he continues to teach Chinese Martial Arts and practice his Medicine. He plans to return semi regularly to Australia and will continue his work as a Qi Gong Therapist for which he is very much in demand.